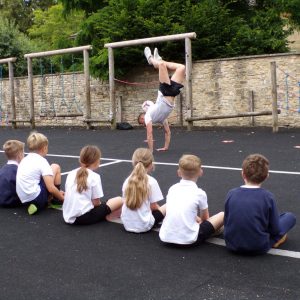 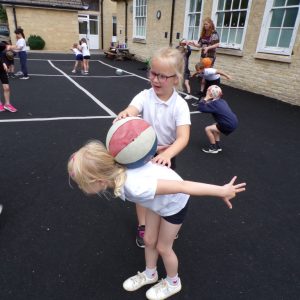 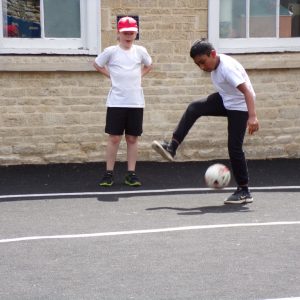 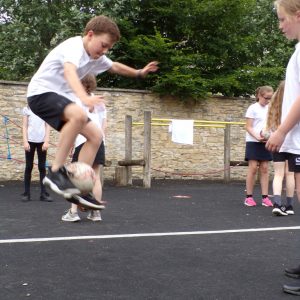 Burford Primary School put the disappointment of England not quite winning the European Championship behind us by inviting World Record holder Jamie Knight in to school. Jamie wowed the children with his international renowned freestyle football skills which have been performed on Ireland’s got talent and at some of the biggest football stadiums across the world.

He began with a freestlye routine which included the two tricks that Jamie is a World Record holder in and a number of his other impressive athletic skills. This was followed by a workshop for all of the children, having a go at learning some of Jamie’s moves.

Our keen footballers were also able to sign up to a freestlye workshop at the end of the day, learning some more freestyle moves and gaining some advice on how to learn the moves quickly and more effectively.

It was great to see all of the children having a go at some of the incredibly difficult moves and we found we had a few freestyle naturals! The children also learnt the importance of discipline and perseverance, as Jamie spoke of the time he has to dedicate to his training to remain in the top 10 freestyle footballers in the world.

There are no upcoming events. 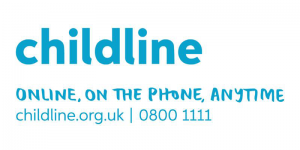 We use cookies on our website to give you the most relevant experience by remembering your preferences and repeat visits. By clicking “Accept All”, you consent to the use of ALL the cookies. However, you may visit "Cookie Settings" to provide a controlled consent.
Cookie SettingsAccept All
Manage consent

This website uses cookies to improve your experience while you navigate through the website. Out of these, the cookies that are categorized as necessary are stored on your browser as they are essential for the working of basic functionalities of the website. We also use third-party cookies that help us analyze and understand how you use this website. These cookies will be stored in your browser only with your consent. You also have the option to opt-out of these cookies. But opting out of some of these cookies may affect your browsing experience.
Necessary Always Enabled
Necessary cookies are absolutely essential for the website to function properly. These cookies ensure basic functionalities and security features of the website, anonymously.
Functional
Functional cookies help to perform certain functionalities like sharing the content of the website on social media platforms, collect feedbacks, and other third-party features.
Performance
Performance cookies are used to understand and analyze the key performance indexes of the website which helps in delivering a better user experience for the visitors.
Analytics
Analytical cookies are used to understand how visitors interact with the website. These cookies help provide information on metrics the number of visitors, bounce rate, traffic source, etc.
Others
Other uncategorized cookies are those that are being analyzed and have not been classified into a category as yet.
SAVE & ACCEPT
Translate »